Hundreds of civilians are believed to have been killed in violence since the start of the year, with Islamic Relief’s mobile emergency teams alone treating some 30 civilians who suffered war-related injuries in recent weeks.

Despite a temporary truce coming into force in Greater Idlib in September, more than 200,000 people are thought to have been displaced there in the six months since. Camps in Idlib – currently home to more than 190,000 people – are already bursting at the seams, with conditions deteriorating as aid supplies dwindle and the international community shifts its attention elsewhere.

Naser Haghamed, CEO of Islamic Relief, said: “The crisis in Syria is far from over and for more than three million people in Idlib there is still no end to this living nightmare.

“There are grave shortages of food and medicine and families continue to be displaced at a shocking rate. Some families have been displaced ten times or more during the eight years of crisis and some 40,000 are having to pick up and leave again just last month in the Idlib region.

“Every time a family has to move due to security risks, or because they do not have access to the most basic of services, they become poorer as well as more at risk of abuses like child marriage and forced recruitment to armed groups. Children often have to drop out of school, while the rest of their families struggle to get jobs and are torn apart from their support networks.

“After eight years, people in Idlib increasingly feel like the international community has forgotten about them. They have no idea what will happen to them next or when or if they will ever be able to go home or if they and their families will live to see an end to this barbaric crisis.”

Violence has reduced since September, but should a fresh assault begin, the decimated healthcare system will be unable to cope.

Medicine shortages are rife, and insufficient clean water and electricity makes even routine surgery potentially deadly, with chronic shortages of anaesthetics meaning people often only receive partial pain relief during operations. Many doctors and medical staff have fled the country, while those who remain are often not being paid, forcing them to charge patients for their treatment.

Treatable diseases like pneumonia are rampant and people cannot access proper care for illnesses like cancers and kidney issues. We are also seeing a steady stream of children injured and even killed by unexploded ordnance hidden in the rubble of destroyed homes and buildings.

“Death could be much better than this life”

“We have been displaced seven times because of the war,” said mother-of-five Um Kasem, a widow living in Idlib.

“Whenever we move somewhere, war arrives. We then kept moving between small villages – there were so many that I forgot their names. Sometimes, we were in an area for a month and we would have to move. We got very tired. 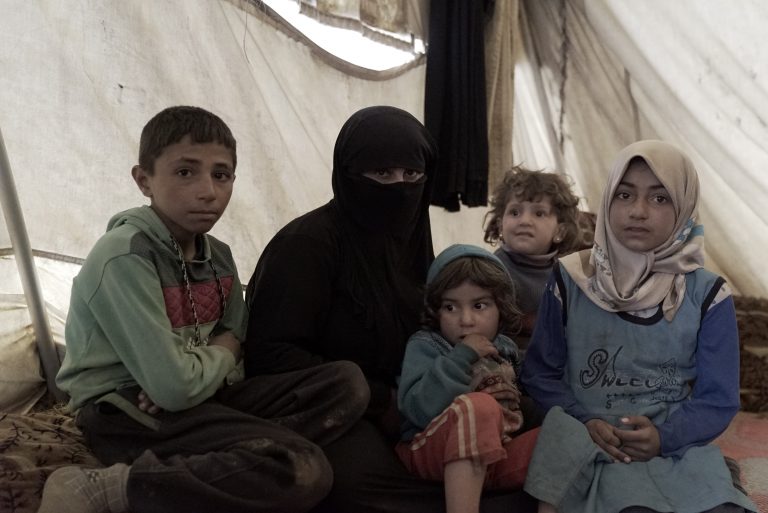 Um Kasem and her family have been displaced multiple times in Idlib.[/caption]

“I wish I could die and not be in need from any one. Death could be much better than this life. When you have to beg for food… what is the point of life?”

Islamic Relief has supported medical staff and medical facilities, but major hospitals and facilities have had to close or severely cut back their services.

Haghamed added: “There is a huge sense of panic now in Idlib as more health facilities are forced to close and people are dying or suffering in acute pain because they cannot get the treatment they need. Once again, it’s the beleaguered civilians who are finding themselves under attack on all fronts. Wherever they are and regardless of who is controlling them, people must have access to life-saving healthcare and the international community must step up to ensure that aid continues to reach those in crisis.”

Repeated displacement, combined with growing needs, has pushed families to the brink with many reporting that they are having to go hungry or sleep in leaky tents.

As incomes and living standards have collapsed, staff on the ground in Idlib have reported widespread use of child labour, with early marriage and even child recruitment being seen as families struggle to earn enough money to feed themselves.

In one camp designated for displaced widows, Hadeel, a 12-year-old girl, said that some girls there had already been married off by their struggling mothers. Children are also at risk of violence as they are forced to walk for miles to go to school as local schools have been destroyed or closed down due to teacher shortages.

“Even as this need grows though, the situation in Idlib continues to fall further down people’s priority list. But we cannot allow this tragedy to unfold unnoticed and for children here to know nothing but suffering.

“The international community cannot look away as the children of Idlib and Syria have to face yet another year of violence, displacement and deprivation. We urgently need a lasting and durable peace solution for the whole of Syria. It is also crucial to have immediate humanitarian support to revive the economy and essential services so that people no longer have to go hungry, so that they can access basic health services and so that children no longer go to sleep terrified of whether they will wake up or not. Eight years of this is far too much already and we deserve to give all the people of Syria hope and dignity once again.”

Islamic Relief provides lifesaving humanitarian aid and assistance in Idlib, and are one of the last major international NGOs still operating on the ground. Last year alone, we reached nearly 2.5 million people in Syria. We also provide extensive support to Syrian refugees in Lebanon, Jordan and Iraq.

Help us continue to provide the Syrian people with the lifeline they so badly need: Donate to our Syria Appeal today.